END_OF_DOCUMENT_TOKEN_TO_BE_REPLACED

The VNS3 Firewall is a wrapper around Linux’s “iptables”. The VNS3 firewall abstracts away the concept of tables, removing a variable and making the process more user-friendly. Today we’ll take a look at some of the newest features of the VNS3 firewall.

For those unfamiliar, below is a short synopsis of how the VNS3 firewall works. You can also read our full Firewall Overview article here: https://www.cohesive.net/firewall-overview-with-vns3

Each firewall rule is comprised of three parts:

Packets entering VNS3 traverse the chains in a particular order. The chain determines at what point during packet processing a rule will be matched and an action taken on the packet. Certain conditions and targets may only be used in certain chains.

If a packet does not match any rule in a chain, the default action is ACCEPT, which simply sends the packet along to the next step.

A rule’s conditions determine which packets will be matched; all conditions of a rule must be met before an action will be taken. If any condition is not met, the packet will be checked against the next rule in the chain.

When a packet matches all conditions of a rule, the target operation is carried out and the packet moves on to the next step. That packet will NOT be checked against any other rules in that chain.

These basic conditions (as well as many more) are available:

The diagram below details the order of the steps packets take as they traverse VNS3. 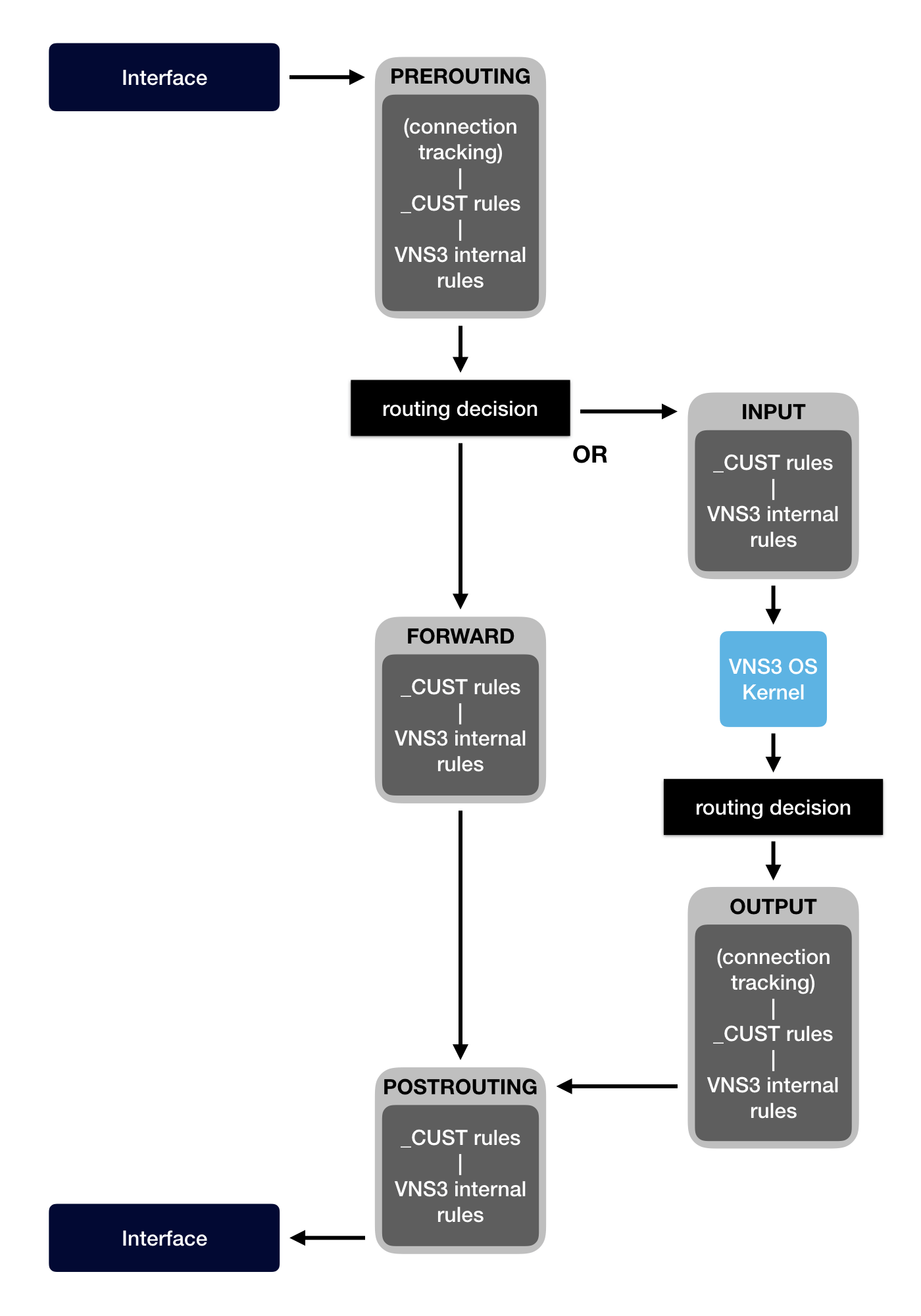 Lets take a look at a few examples, starting with this PREROUTING firewall rule:

If the above rule is the only PREROUTING rule you have in place, any packet entering on VNS3’s eth0 interface with any source outside the 172.31.0.0/16 network will not be affected; the default ACCEPT action will be taken and the packet will move on to the next step.

As an example, TCP port 8000 traffic for the VNS3 Web UI and API traverses the INPUT chain, as do response packets from VNS3’s configured DNS and time servers, among other internal services.

Following a routing decision to determine the outgoing interface and before being sent to the POSTROUTING chain, packets leaving VNS3 (including Web UI and API responses) traverse the OUTPUT chain.

Only a packet with a source inside 10.0.0.0/24 and destination inside 192.168.0.0/24 (or vice-versa) would match one of the first two rules; those would skip over the DROP rule and be sent on to the POSTROUTING chain. Anything with a source or destination not matching those two networks is dropped by the third rule.

This is a basic example of how to configure whitelisting; the DROP rule at the end with no conditions matches all packets and defines a default action for the chain.

Let’s take a brief look at a couple newer features of the VNS3 firewall: MASQUERADE-ONCE and geoip.

We recommend using MASQUERADE-ONCE over MASQUERADE where possible because it is more performant. It does this by calculating the source IP based on the -o outgoing interface only once – when the rule is created. This allows use of the connection tracking table to shorten the time packets spend traversing firewall rules.

The “geoip” module condition was added to the VNS3 firewall to allow users to block/allow traffic by country of origin/destination. The example rule below firewall blocks all traffic originating from Australia(AU), Canada(CA), and Japan(JP).