END_OF_DOCUMENT_TOKEN_TO_BE_REPLACED

An hour long keynote from the famous Jeff Barr started the afternoon off. Mr. Barr sped through all the major product announcements and features from the reInvent keynotes, and even some of the new changes that didn’t make the cut for the big stage. Snowball and the semi-truck full of data named Snowmobile were a bulk of the news, with an illustration in Legos.

I’m glad Jeff Barr went though other recent announcements as well – namely the new Ohio, Canada, and London regions. With the flood of announcements at re:Invent this year , I missed a few products and new integrations. There were price reductions for S3 services, Lightsail for virtual private servers in AWS, burstable-performance instances in the t2 family, DDoS protection service AWS Shield , and AWS X-ray. Check out the AWS site for re:Invent videos, podcasts, and highlights. And as always, read Jeff Barr’s excellent blog for news and in-depth tours of features.

One thing I missed during reInvent was the IPv6 support for EC2 instances, starting in the new Ohio region. Along with the longer instance IDs, the IPv6 support should help with the explosive growth in AWS usage. On a similar note, our long time customers will probably be interested to know that AWS users can now migrate unassociated Elastic IP Addresses from EC2-Classic to EC2-VPC and back. It can potentially help people upgrading those ancient VNS3 instances to the latest and greatest 3.5.2 and 4.0.4 versions out now.

Breakout Groups – the Future of AWS?

After the keynotes, the event split into a few different sessions. We had the tough choices of deciding between topics like Serverless, AWS Lambda, IoT, and microservices on ECS. Judging from how full the rooms were, Serverless was the most popular choice.

At the end of the afternoon, my favorite part were the lighting talks. 4 different Amazon Solution Architects (SAs) presented on what they clearly knew about and wanted to talk about. Some were repeats from talks at reInvent, which was great for me since I didn’t get to check out many sessions while holding down the Cohesive Networks booth. I really enjoyed that the lightning talks were done by Chicago-based SAs.

The first talk, and one of my favorites, was on how to incorporate Lex into products. It was a reInvent repeat, and our SA did both a run though of slides and a live app demo of Flixter, a movie finding bot that could adapt to real-time showtime data, multiple input questions, and changing the request for tickets.

The other great talk was the final lightning talk. Jeremy Cowen, a Chicago SA, demo’d the Simple Beer Service. The service uses IoT inputs to measure the sound, activity and flow of an office kegerator. If there are several beer pours and a lot of noise around the kegerator, SBS operators can find out if there’s an office party in progress without having to leave his or her desk!

Now we just need Jeremy to come demo it on our office kegerator next. Check out Simple Beer Service on GitHub here. 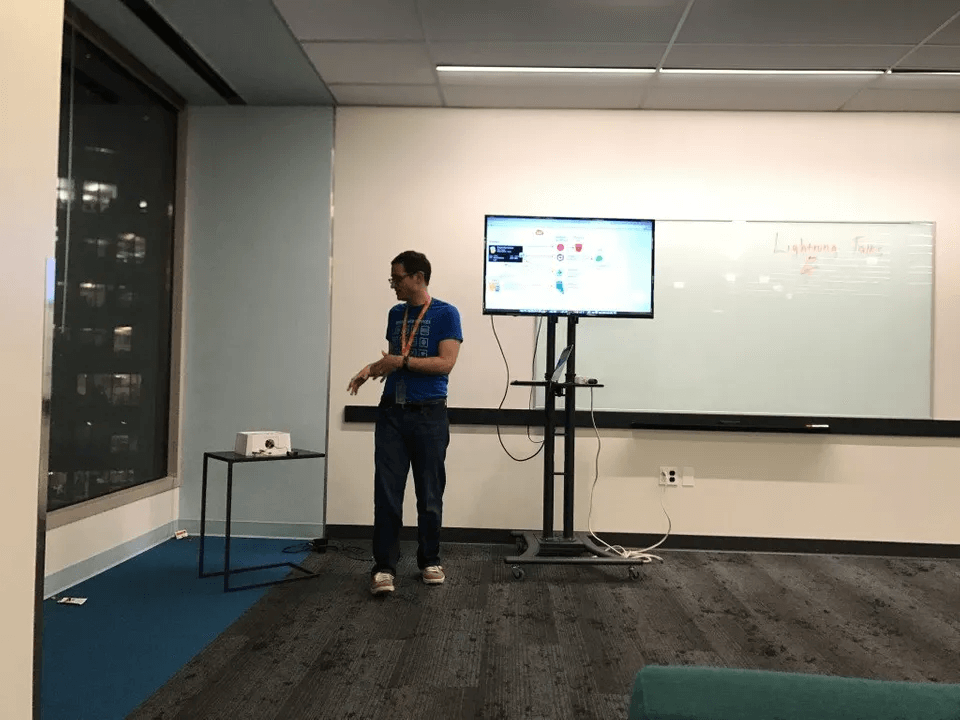