END_OF_DOCUMENT_TOKEN_TO_BE_REPLACED

What is an IPsec based VPN?

IPsec is a protocol suite for securing IP (transport layer) communications between peers by authenticating and encrypting each packet of communication.

In the network diagrams, the two red lines represent IPsec tunnels from a VNS3 Controller to the two remote firewall devices. The London and Chicago locations are two different endpoints. 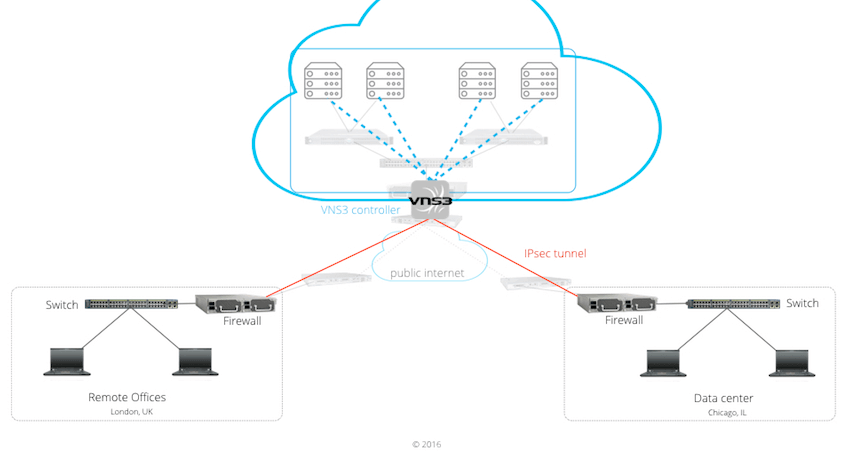 An IPsec tunnel is built between two endpoint devices that “speak” the network standard. You can think of the following two phases and these two devices cordially introducing themselves and establishing a connection via an appropriately firm and friendly handshake.

What is an IPsec based VPN?

An IPsec based VPN is made up of two parts:

Basically there is an initial brief interaction where one or each of the devices attempt to discover each other, via the Internet, they then trade Phase 1 (IKE) parameters and attempt to get a Phase 1 (sometimes called IKE or ISAKMP) connection which creates the keys used to encrypt Phase2. They then trade Phase 2 parameters and attempt to create an encrypted Phase 2 (sometimes called IPSec SA or ESP) tunnel connection.

Phase 1: Initial negotiation phase. Peers find each other over the internet and trade security parameters in order to create “session keys” that prove they are who they claim to be. This is what security experts call a key exchange, and the peers use the Internet Key Exchange Protocol (IKE) to validate each other’s security claims.

Phase 2: Peers trade Phase 2 security parameters. The peers trust each other, and now can create an encrypted tunnel that connects them using IPsec Protocol Encapsulating Security Payload (ESP) to encrypt the IP Packet. That way, no one else can see what data is traveling between the peers. Even if someone was able to see the data, it is all encrypted and unreadable without a secure key.

How does an IPsec VPN work?

IPsec is able to secure packets as they travel across an IP network, usually between two sites separated by the public Internet. IPsec uses cryptographic security services to authenticate and encrypt each data packet as it travels two endpoints and protects that data from traffic sniffers.

IPsec connections ensure data isn’t read or tampered with when it travels across any type of network. IPsec is especially important when you’re building hybrid deployments between public cloud providers or the public internet.

IPsec has 2 types of implementation: a host-to-host transport mode, or network tunneling mode: